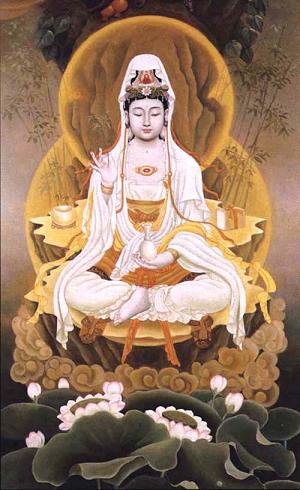 Every Spring, tea mavens flock to the cavernous halls of the Las Vegas Convention Center for World Tea Expo. Some come to taste and try new teas and products; others to exhibit.  Some are old hands; others represent new companies looking for distributors.  One section is devoted to many first-time exhibitors from Chinese provinces known for tea.  At these booths, there may be language barriers, but the products define the linguistics of  tea.

Meet Rongfend aka Alan, Wang (left), who with his father, are the proprietors of  Xing Xi Tea Company Ltd,  Anxi county, Fujian province, a section of China known for misty, foggy mountains and fine oolongs with landscapes out of a fine brush painting.  Xing Xi encompasses a tea “garden” of about 194 acres, and two processing plants.

While Xing Xi Tea Co.  Http://www.xingxitea.com offers a variety of superb white, black, yellow, green, and jasmine teas under the “Geng Yun” label, their oolongs practically jump out of the cup.

Anxi County in Fujian, along with Guangdong province in China, and in Taiwan, are known for legendary oolongs. Cultivars of the tea plant, camellia senensis sinensis,  give oolong its distinctive complex and flowery aroma and flavor.  Like fine wine, the terroir also defines the unique characteristics of the tea. ” A good oolong,” notes the  Xing Xi website, “has fleshy, sturdy and weighty leaves. It possesses a soft floral aroma. The taste is smooth in the throat, full-bodied, with a strong sweet tail note. The liquor is golden yellow, clear and bright. The infused leaves are green with redness round the edges.”

At Xing Xi, the control over the finished product goes from the fields to the processing plants. About 44 of the 194 acres at Xing Xi  are certified organic by the NOP (National Organic Produce). According to the USDA, “Certification allows a farm or processing facility to sell, label, and represent their products as organic. “ Standards apply both in US and in Canada. They are also certified by BCS, a private, German-based agency that follows EU regulations.

The factory has numerous safety and hygiene awards, including HACCP certification or Hazard Analysis and Critical Control Points. (A digression: HACCP began in the 1960s after NASA  asked Pillsbury to manufacture food for space travel. PIllsbury later used the program at its own facility when glass got into the  farina. After the 1970s botulism scare – a can of  Bon Vivant’s Vichyssoise anyone – the FDA asked Pillsbury to start a program to train food inspectors. Now expanded to  international use, HACCP is a preventive approach to food safety that measures the process, not the finished product. )

A good cup of oolong has a long and complex history. Oolongs (or wu long, depending on pronunciation) means “dark dragon.” It is one of the most difficult and challenging teas to manufacture and covers a broad spectrum of leaf style, oxidation, and sometimes aging.   It requires multiple rollings, sensitive firing temperatures, and a final baking process.

One of the most fabled oolongs is “Tie Kuan Yin” or “Iron Goddess of Mercy.” The legend behind the origins of Tie Kuan Yin is as simple as its preparation is complex. The story goes that a poor farmer passed by a rundown temple dedicated to the goddess Kuan Yin on his way to work.  Every day. the farmer did his best to clean it up, burning incense he bought on his modest income. The goddess was so impressed that she came to him in a dream and told him that behind the temple was a treasure that would benefit the farmer and his neighbors for generations. Excited, the farmer  rushed out and was disappointed to find on a scraggy tea bush. Still, he tended to it carefully, and harvested the leaves. When he drank the tea, he discovered its unique aroma and lovely amber color. Following the goddess’ instructions he gave shoots to his neighbors. All became prosperous farmers and the temple was restored to its former glory.

Well-made Tie Kuan Yins have a distinctive floral scent, a haunting mouth feel and lovely amber color, although some can taste lighter and appear greener, depending on the skill, or desire of  the tea master. But when you have an exceptional Tie Kuan Yin, such as those from Xing Xi, your smell and taste sensors know it.

Like Champagne or Asiago cheese, , Tie Kuan Yin from Anxi has “Protected Geographic Indication.” It is like a trademark that indicates that a certain product has qualities unique to the region.  In China — as in Europe and the US — the commercial possibilities have not been lost. “You could say that geographical indications (GI) are the Sleeping Beauty of the intellectual property world,” said World Intellectual Property Organization lawyer Marcus Höpperger at a Beijing Symposium way back  in 2007.

“You can make make money out of it,” extolled a press release from the trademark Office of the People’s Republic of China reporting on a 2011 China-US workshop on Geographic Indication Protection, noting that a tea grower in the region saw his profits per acre increase 5-fold after the designation.

But talking to Alan Wang, it’s clear that the care and pride he takes in his tea has precedence over all else. Like winemakers or artisan cheese makers, he is of a new generation who cherish the past while prizing the future. At the end, it is the quality that is front and center.

Not true! Common misconceptions about tea

After a long teabreak, LTR is back with a pressing issue: Tea may be the…

Do you know what you are drinking? Name vs. brand

In yesterday's posting, LTR asked readers which two tea bags out of the four pictured…