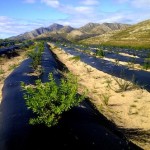 Unless you grew up in South Africa, chances are you never heard of Honeybush, a botanical cousin of its more famous relative, Rooibus, but with a smooth finish and a surprising wealth of health benefits that a Canadian-based company sees as a valuable tool in the fight against obesity.

Honeybush, from the genus Cyclopia, belongs to the  fynbos (small bush in Africaans) bione. For generations, Honeybush was a mainstay of folk medicine to aid digestion, alleviate colic in babies, relieve menstrual cramps and menopausal symptoms, and soothe skin rashes and other ailments. Some households kept a simmering pot of the naturally sweet herb to scent the house and drank the infusion. (Because of its caffeine-free properties, it never got bitter.)   Unlike the tea plant camillia sinensis, Honeybush is a “leguminosae” similar to soy bean, alfalfa spouts, and red clover. As a member of the legume family, it contains the isoflavones found in soy beans that act as phytoestrogens or plant-based estrogen.  (While some have proposed phytoestrogens as a safer alternative to hormone replacement therapy, the results of studies are conflicting.)

In terms of taste, “one of the main differences between rooibus and honeybush, is that Honeybush is low in tannins,” says South African Alister Frayne, a fit and friendly physician who is the co-founder of Wild Mountain Tea: The Wellness Tea. (Tannin, a natural astringent, is what gives you the pucker in unripe fruit and is in red wine. Tannins can also inhibit iron absorption.)  “It’s much easier on the palate.”

What excites Dr. Frayne about the herb is its potential to combat one of the growing medical scourges of our time: obesity and its offspring, diabetes. As a primary care physician now based in British Columbia Dr. Frayne, is on the front lines of the current health crises: young children with excessive dental caries, hyperactive adolescents, and patients of all ages suffering from obesity and diabetes. “The current statistics indicate that 1 in 4 Americans now have pre-diabetes,” write Dr. Frayne.  “This is clearly a worldwide socio-economic and health crisis – in fact, many experts are now referring to it as the “Diabesity Epidemic”. (Pre-diabetes, by the way is not a benign condition, and in some studies is actually associated with higher cardiovascular mortality rates than diabetes proper.)”

Three isoflavone chemical compounds found in  Honeybush: hesperidin, mangiferin and isomangiferin may counteract the effects: According to Dr. Frayne,  “recent animal studies have shown that these chemicals appear to exert significant effects on mammalian blood sugar and cholesterol levels.” Mangiferin, which comes not surprisingly from mangos, and is also in Honeybush, contains a wealth of preventive and therapeudic uses. Some these anti-diabetic, anti-inflammatory, and anti-cancer properties of mangiferin were outlined in a 2013 review by Polish scientists at the Department Pharmaceutical Biology and Botany at the Medical University of Warsaw.

Recently, the “anti-diabetic potential” of Honeybush tea on laboratory-induced obese, insulin- resistant rats was the subject of a study by South African and Danish scientists. Rats were administered a  strong infusion of honeybush, medication, or a placebo.  The researchers found that honeybush tea was as effective as medication in reducing glucose levels.  In another study, South African researchers  found that when the herb was made into a tea, the polyphenols in the leaves reduced fat formation in the lab. In other words, it could help fight fat.

Finally, Honeybush  contains pinotol, a natural sweetener that has none of the potentially dangerous effects of aspartane. “I have been steering my patients away from “food like substances” (ie industrial food) including beverage concoctions, and towards real food and real drinks for some time,” writes Dr. Frayne. “Among available Ready To Drink beverages for my many diabetic, pre-diabetic and obese patients, Honeybush is the best option, in my opinion, to augment their return to more natural eating. I now have a few Diabetic patients who are taking it regularly and I am monitoring them with great interest “

So how did Dr. Frayne turn his passion into a business that encompasses three countries and two continents? The honor here belongs to cousin David Mills, a marathon runner, Oxford graduate, commodities trader, and entrepreneur.  After Mills discovered the plant on a marathon run through throughout the beautiful South African mountains, he  subsequently bought a 2400 acre farm that became the Heights Tea Estate, and the beginning of the Honeybush saga.

Today, the farm is one of the biggest commercial cultivators of Honeybush. It is also a socially responsible endeavor. Both Frayne and Mills pride themselves on hiring locally, giving benefits to all shareholders, and paying twice the minimum wage. The company is also involved in  wilderness conservation.

While Frayne is based in Canada and Mills in South Africa,  the iced tea version is brewed, tasted, and bottled at the Tao of Tea in Portland, Oregon.  The packaging of the tea is so fetching that it was honored by the North American Tea Championship at the World Tea Expo in Las Vegas this past June.

But it is the health properties – and the taste – that remains the cornerstone. Nor has the scientific community been asleep to the tea’s potential: “You should be aware that there is enormous interest among the scientific community in South Africa,” wrote Dr. Frayne. “In fact, my (co-founder), David, is in regular contact with Professor Quintin Johnson, a Harvard educated Biochemist, and founder of the Herbal Sciences Institute. Professor Johnson is involved in many of the Medical Research Council and Agricultural Research Council efforts into unlocking the secrets of ancient African herbs. Honeybush is at the top of this list.”

You read it here first, folks.

Are we poisoning our kids?

“Kids were so used to sugared drinks that when we gave them mango tea,…