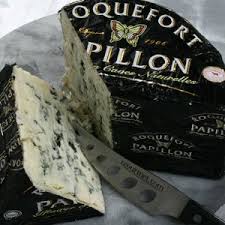 If  anyone needed proof, a stroll around the  French pavilion at the SF Fancy Food Show was testimony to the  tradition, skill and care of French cheese makers. Here are a few: From Bourgogne between Beaune and Dijon, comes Fromagerie Delin’s line of meltingly runny, slightly tangy and utterly deliciously creamy bries – some with an herb coatings — that relegates all those rindy, spongy “bries” to cheese purgatory.

Sold under the label Brillant Savarin (after the famed French gastronome who wrote The Physiology of Taste), the cheese was developed in 1930 in Normandy; production later moved to Bourgogne. It has a soft creamy texture, slightly tangy and sweet nut-like taste and should be eaten young and fresh. Other labels in the line include Regal de Bourgogne, Cremeux and Prestige (in Canada). Packaged  in traditional rounds as well as small vacuum-packed tubs, they are enriched with creme fraiche and have a texture that literally melts in the mouth. Try this with a full-bodied darjeeling or tie-guan yin oolong. Surprise: You can buy it at Cosco as well as Whole Foods. 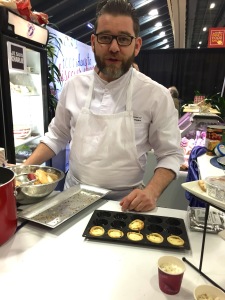 (right) expertly  julienned leeks for a tart with goat cheese. Many of the smaller Courturier chèvre logs are made in Hudson Valley; larger, ripened ones are imported from France. Try plain or with herb dusting. The tart is perfect for a savory tea. Courturier cheeses are sold at Molly Stone and at Safeway, yes, Safeway, among other stores.

From the limestone caves of France comes Roquefort – tangy, veiny, without the overpowering  taste you might have been put off by in the past. It’s  the specialty of Papillion Black Label  that’s been around since 1906.

The process uses its own baked rye bread to cultivate Penicillium Roqueforti, which gives the Lacaune sheep roquefort its unique taste that’s assertive,  complex and literally melts in your mouth. If you’ve been put off by roquefort, but are still intrigued, try the one from Papillion. Pair with a strong tea- pu-erh, rock oolong, or Assam. Papillon is sold  on Amazon and fine cheese stores. 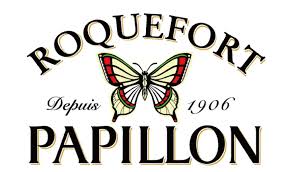 More tea pairings: Coconut and tea — and a little info on health benefits too

With the popularity of all things coconut, the creamy sweet tang of coconut chips go…

LTR goes to the Winter Fancy Food Show in SF: new kids in the market

So what's new? Caramel everywhere and of course seas of gluten free everything. Salted chocolates…

Thursday, as you put the bird in the oven, why not consider using tea: 1.…