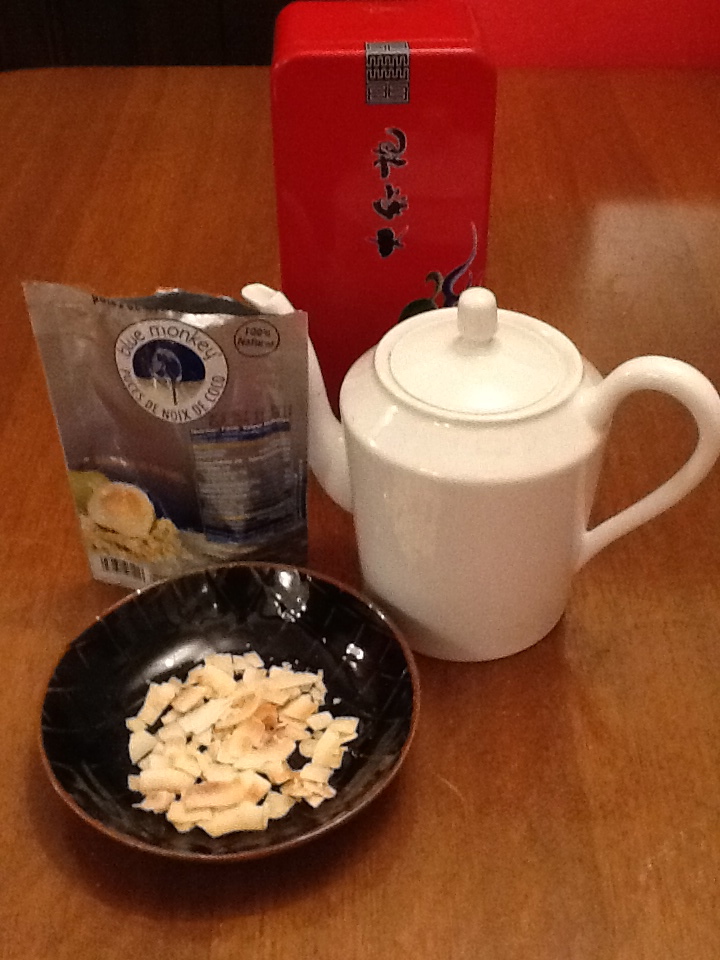 With the popularity of all things coconut, the creamy sweet tang of coconut chips go surprisingly well with a lightly oxidized oolong,  green, floral blend, or of course darjeeling.  Think of the East Asian vibe of coconut based dishes (curry, anyone?) and a rich sip of a first flush darjeeling from Glenburn Tea.

Blue Monkey, a Callifornia-based family-owned business from the people who brought you glacial water brands such as ICE AGE, debuted their coconut products at the monster San Francisco Fancy Food show this past January. The chips also had a star-studded debut: Reuters reported they were offered backstage at the Oscars.

While LTR did not fancy pairing their coconut milk with tea as a milk alternative,  the chips made with Thai coconuts were fresh, crisp, yet chewy and packed a rich, but subtle flavor.

They would be  a natural alternative to carb-laden crackers or flour laden treats. (Although don’t think we don’t love a scone!) But these are on another level from the coconut chips you might remember from trail mixes. Ingredients are  coconut, cane sugar and salt — other flavors include wasabi and ginger. LTR can’t vouch for the latter as they haven’t been sampled. Available this spring at Whole Foods , or online-check the website.Each 1.4 oz packet has 7gms of fiber, 14 gms of fat — a tad too much salt (230mg or 10% of recommended daily intake based on 2,000 calorie diet).  While calories per packet are listed as 230, the packet contains way more than one serving –the coconut is so rich, you want to savor, not stuff.

Now for a little on the health benefits:  Since coconut in its oil form is  saturated, you might think to stay away. Not so. The oil is rich in medium chain  triglycerides  (MCT) which plays a role in actual fat reduction.  “MCT are a good source of energy in the form of ketones,” wrote Dr. Michael Rafii, director of the Memory Disorders Clinic at UC San Diego. Ketones are the byproduct of fats breaking down in the body. (You might remember that squirrelly “ketosis’ breath from  Atkins dieters.) Indeed, high levels of ketones can be the result of fasting or low glucose intake. But what’s interesting about MCT- laden coconut oil is how it travels through the body. According to Dr. Rafii, MCT converts to ketones in the liver, which can be used by the brain as fuel, rather than stored in the body as fat.

So while coconut is high in calories, it won’t go straight to belly fat.

Plums and tea and cheese: Yes! And Earl Gray/bourbon recipe too!

Say tahtah to cucumber sandwiches on crustless breads: Instead, why not think tea paired with…

Thursday, as you put the bird in the oven, why not consider using tea: 1.…

Food pairings: tea is not coffee

Would you go to a restaurant that offered wines from only one label? Of course not.…