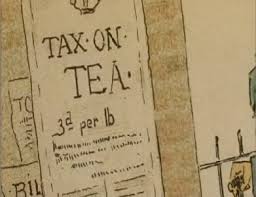 With today’s Tea Party lauding their connection to the original Boston Tea Party and dressing up as 18th century patriots at rallies, it’s time to take a look at history. While Tea Party movement rails about runaway taxes, the original impetus was about control and self governance. Then there is the elements of racism. But first, a little

The East India Company was the multi-corporation of its day. When it was about to go under, the government of King George III bailed it out by giving the company rights to sell directly to the colonies without going through tea brokers in London. While the cost of tea went down (little tax, no middleman), thus undercutting the going rate of smuggled tea from the Netherlands, only approved wholesalers could sell it. The combination of having no say in instituting the tax and giving one company a monopoly on the tea trade was the red flag for the colonists.  Simply put, the colonists had no voice in electing those who set policy that would affect their lives.

But why target tea?   While tea was widely consumed across social classes, a 2010 article in American History Magazine, claims that  the fancy tea accoutrements of the upper classes and rituals redolent of pinkie bending English aristocracy, made it an easy target. Abigail Adams called it “that bainful weed.” In Boston, Dr. Thomas Young, physician to John Adams  characterized it as not just a “pernicious drug,” but a”slow poison, and has the corrosive effect upon those who handle it. I have left it off since it became political poison, and have since gained in firmness of constitution. My substitute is camomile flowers.” (Was this where tisane v. tea began to flourish?)

Who were in the original Boston Tea Party? The 116 participants were a ragtag bunch from all walks of life. Most were young: only nine were over forty; many were teenagers. Fearing for the consequences, many left town after the tea was dumped; others took word of their participation to their graves. Even Dr. Young, who was reputed to be giving a speech about the evils of tea (perhaps the aforementioned) while his fellow colonists were sharpening their tomahawks, left town shortly afterward and returned with his family to England.

Why did the Boston Tea Party dress up as war-whooping Indians complete with  feathers, and charcoal blackface wielding tomahawks? “Those disguised patriots were impersonating American Indians in hopes that the act of insurgency they had just committed would be blamed upon the Indians,” wrote journalist Tim Giago, an Oglala Lakota, in the Huffington Post.  “They certainly were not dressed in the typical patriot outfit they usually wore and not one of them was dressed as George Washington.”

Giago (right), a 1990 Neiman Fellow at Harvard continues: “ I remember that as an elementary student at Red Cloud Indian School on the Pine Ridge Indian Reservation we used a history book that sugar-coated, ignored or revised history as applied to Native Americans,” wrote Mr. Giago in the Huffington Post. “but I vividly recall the picture in this book of patriots disguised as Indians as they dumped boxes of tea into Boston Harbor. ”

Take a moment and think about the impact of a mob of screaming Indians wielding tomahawks. Added to this, the Indians sided with the French against the British (and the colonists) during the French Indian War, in which George Washington served as a lieutenant, and which resulted in the first taxes on the colonies to raise revenue for the cash-strapped government of King George III.

Finally, many attribute the tea thrown overboard as black tea from India. Davison Newman & Co. LTD, whose tea chests were on the fated boats, market Boston Harbour Tea, a blend of Ceylon and Darjeeling. But many sources — including the Old South Meeting House museum in Boston -say the tea thrown overboard was from China, not India. It was called “bohea,” a highly oxidized almost black oolong from the famed Wuyi Mountains.

Behind the Original Boston Tea Party

Common wisdom is that “taxation without representation” was the rallying cry for tossing 90,000 pounds of…