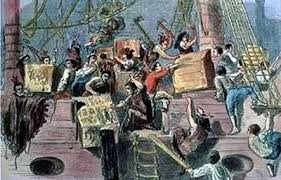 Common wisdom is that “taxation without representation” was the rallying cry for tossing 90,000 pounds of tea worth $1,000,000 in today’s dollars into Boston Harbor in 1773, an iconic act of civil disobedience that set the stage for the American Revolution.

But the reasons behind the dumpster party are more complicated and cast a jaundiced eye on current day teaparty dogma.

First a little background: The colonists were progressively outraged by the taxes imposed

by the British Parliament. After the French Indian War (in which George Washington served as a colonel), the victorious Brits had a huge deficit and saw taxing the colonies as a way to generate revenue. This resulted in the first direct tax on the colonies, the wildly unpopular Revenue Act of 1764, which taxed imported molasses used to make rum. The new tax actually reduced the existing tax,  which colonists who smuggled sugar from Dutch West Indian largely ignored, but the provisions of the act  tightened up inspections and prosecuted violators through the admiralty, not the colonial courts, which were lenient when it came to smugglers.

Next came the infamous Stamp Act, which put a tax on every officially stamped document from licenses to diplomas. A mob sacked the palatial residence of the then Lieutenant Governor Thomas Hutchinson, thought to be sympathetic to the Act. (Hutchinson, the great-great grandson of Alice Hutchinson, for whom the Parkway in Westchester, NY was named, turned his allegiance to the crown, in part due to his animosity towards Samuel Adams.) Other protests followed and the Act was repealed in 1766.

Did Parliament ever learn?  Next came the Townshend Act, which taxed British imports,

such as glass, lead, paper — and tea, which was the coffee of its day. Colonists reacted by boycotting British items and starting  businesses. By the end of 1789, British imports to the colonies declined by half and the  Townshend  Act was repealed — except for the tea tax.

The colonists’ boycott of British goods was first lifted by New York, followed by Philadelophia and trade resumed despite the tea tax. Even John Hancock resumed tea trade — transporting 45,000 pounds of taxed tea oh his ships between 1771 and 1772.

The tea from Britain was from the East India Company, which by the mid-18th century was the most powerful company in the world. But import duty, massive tariffs and smuggled in Dutch tea —  ate away at profits. Bad business decision within the company and corruption resulted in a calamitous situation for this once powerful company: By 1772, it owed the government over a million pounds in fees.  With demand decreasing due to high tarifs and competition, over 17 million pounds of tea sat waiting to rot in warehouses. The solution was the Tea Act of 1773.

Under the Act, tea from the East India Company was exported directly to the Americas.  Previously, tea was sold to brokers who sold to American wholesalers. By cutting out the middlemen, tea became cheaper to export. In addition, the export duties were reduced. The result was the tea was cheaper than smuggled Dutch tea. Soon, 2,000 chests of 600,000 pounds of tea were prepared for America teapots.

But there was a crucial caveat: The tea would only be brokered in America to wholesalers handpicked by the Crown.The East India Company would have a monopoly on selling tea to the colonies. So while the tea was cheaper, the British controlled the source and the the outlets. The colonists were not fooled: They realized that any segment of commerce could be controlled and that the British rulers could dictate who would sell and who would buy goods.

In response, American captains refused to ship the tea and it was sent via British ships to New York, Philadelphia, Charleston, and Boston. When the tea got to New York and Philadelphia, agents, aware of the opposition, refused the tea. The ships were forced to turn around. In Charleston, the tea was warehoused. (It was later sold and proceeds went to finance the Revolutionary War.)

But it was Boston that set the spark for the Revolutionary War. When the ship, the Dartmouth, arrived on November 28 with 114 chests of tea, nearly 7,000 residents responded to a notice:  “Friends! Brethren! Countrymen! The hour of destruction of Manly Opposition to the Machinations of Tyranny Stares in your Face!” On December 2, the ship Eleanor docked with more tea, followed by the the brig Beaver. A circular signed “The People,” detailed the consequences of unloading the tea as “Wretches unworthy to live …and the first victims of our just Resentment.” The December 17 deadline, at which time the customs officials could seize the tea for nonpayment, was approaching.

Captain Francis Rotch of the Dartmouth, was told to see now- Governor Hutchinson to seek permission to leave the harbor. Hutchinson, who was not only a loyalist, but whose two sons were designated agents, refused. (Hutchinson later left for London, where he lived out the remainder of his life. )The ship remained in port.

That night, 30 colonists –among them renown silversmith and later famous freedom rider  Paul Revere –disguised as “Mohawk Indians” took over the three ships, forced the customs officials ashore, broke open tea chests with axes and poured the contents into the harbor. A man who secretly filled his coat with tea was beaten by the crowd.

More than 90,000 pounds of tea went into the harbor. As news spread, tea became toxic. When a rumor spread that an innkeeper in Weston, Massachusetts was serving tea, a mob wrecked his tavern and drank all his liquor. In Britain, Parliment demanded Boston Harbor closed until the cost of tea was repaid. (Benjamin Franklin suggested colonists do just that.) And the Revolutionary War was put in motion.

Was it taxation without representation — or lack of control over their own destiny — that sparked the colonists? After all, tea was cheaper under the Tea Act, as was sugar  under the Revenue Act, but in exchange the British set a precedent of dictating the terms of business and what company would be sanctioned to trade.  The history of the Revolutionary War is filled with descriptions of angry mobs storming and taking to the streets, but was it control over their own destiny and not taxes that sparked the road to independence? You be the judge.

The Pot Thickens: Why the Boston Tea Party matters and what tea went into the harbor