So you think that the history of  tea, that most civilized  of beverages, has a past as genteel as sipping ladies and silver services? Think again. 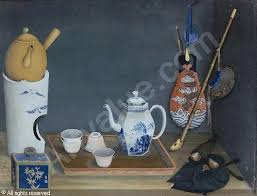 Since the 1600s, (when tea was introduced to Great Britain), the major importer was the East India Company, the Amazon of its day — if Amazon had its own militia,  governance, and a trade monopoly. But tea’s popularity became its problem.  China did not want to trade British goods for tea: It wanted silver.  And it wasn’t only tea the British market coveted, but fine silks and porcelain too. What to do? Answer:  opium.

Although the Chinese emperor banned smoking opium in the mid-18th century and  outlawed it by the 1793, the Brits, in the guise of East India company, saw a sterling opportunity.

Since they controlled much of India, they cultivated opium from poppies and through third party suppliers, flooded the Chinese market with opium, using the profits to buy tea, silks and porcelain.   By 184O, opium paid for the entire tea trade and more than 10 million Chinese were addicted. 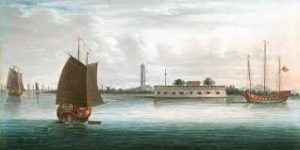 The first opium war was sparked in 1839 when the Chinese destroyed more than 20,000 tea chests totally 1,400 tons of opium warehoused in Canton (Guangzhu). Then, a group of drunk British sailors killed a Chinese villager. The Chinese refused to hand over the soldiers to be tried in a British court.  British warships then  destroyed the blockade at Pearl river and captured Nanking in 1842.  The result of the Opium War led to China paying the Brits, ceding Hong Kong and increasing the number of treaty ports from one to five — including Shanghai.  It also gave Britain the right to try its citizens in British courts and granted Britain  favored nation status. This, and the second Opium War, led to the legalization of opium and to the weakening of the Qing Dynasty, that began in 1611 and was toppled by 1911.

And that, dear readers, is how tea lead to the Big Pharma of its day addicting a whole nation and destroying a dynasty.  Opium was not eradicated in China until the 1940s with ascendancy of Mao.

The Pot Thickens: Why the Boston Tea Party matters and what tea went into the harbor