In 2014, I went to France with fluent-in-French daughter to tour the Loire Valley. Never mind that a few weeks earlier, I felt a breast lump the size of one of the meyer lemons on my tree in  San Francisco .  My seen-it-all internist told me it was no doubt a cyst and  to check it out when I came back. So off I went to explore castles, small towns, and the famed tapestries at Angers. At Le Cremet d”Anjou,  a modest, but Michelin -starred  restaurant on a pin-drop quiet side street,  I had the best dessert of my life: Cremets d”Angers. (right) 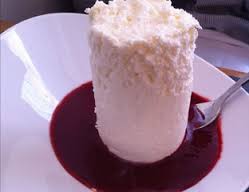 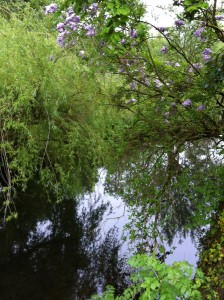 In Blois, we happened to see a beauty contest at the local castle.  The contestants clearly had not done their Pilates and looked actually  human. In Bourges, we spent a rainy May Day sitting at a cafe sipping from a pichet of  vin blanc..

Nothing, I thought,  can go wrong in such a verdant setting. Breast lumps, please! For years, I’ve drunk daily liters of polyphenol-rich tea, waxed lyrical about about tai guan yen versus dah hong pao, avoided sugar and anything hinting of nitrates.I’ve been a regular at yoga and tai chi and read and reported about the anti-cancer properties of green tea, black tea, red tea. A few years ago, I covered the 5th Scientific Symposium on Tea and Health, where a lot of the papers were on tea and cancer. From a lifestyle and academic perspective,  all the boxes were checked.

Back to earth in San Francisco: At the  hospital’s “breast care center,” the routine is to put on a pink (!) gown, get your mammogram, and then sit in the waiting room until you are quietly told the usually now- you -can -exhale” results. Then you get dressed and leave.  But for the unfortunate few, the pink gown stays on. It’s the whispery sympathy  that gets you as you are ushered into another room to speak with the radiologist. That’s when the tall brusk white coat said to me, “you have cancer.”

I’ll spare the details.   Suffice to say that the  not-to-worry cyst turned out to be stage 2-3 invasive cancer. Thus began my odyssey into the hazardous world of cancerland.

Those of certain age might  remember controversial nutritionist Adelle Davis, whose best-selling books, such as “Let’s Eat Right!” and “How to Raise Healthy Children” railed against processed, pesticide laden food.Said Adelle when she found out she had cancer:“I thought this was for people who drink soft drinks, who eat white bread, who eat refined sugar and so on.”

Poor Adeile died of multiple myeloma, a plasma cancer. Was I destined to be the Adele Davis of tea without the fame?

What about treatment? After a lifetime of healthy, no-junk food eating – even when it wasn’t fashionable; after decades of scoffing at any ingredient I couldn’t pronounce, was I going to become infused with scary chemo? What do you do when doing nothing, according to the oncologists, means  death? What do you do when a sympathetic oncologist goes into a rather lyrical description of drugs you can take to lessen the pain of dying? Or another one goes into quite gothic prose to describe the horrors that await those who Do Nothing?

Cancer upended more than one life. Fluent French daughter started packing up to come home, wherever that meant in her whirlwind life. A friend, an artist of some renown who I have known for years, actually took to her bed for three days– and then became a rock of support. Others – strangely relatives – spun horror tales and became very busy. If you are still with me, stay tuned for what happened.

6 thoughts on “Return of the lilac tea room: Part I: a cruel twist”